Find adventure on the open road with Microsoft Streets & Trips. With America’s #1 travel and map software, explore new places, generate maps and directions and even add your own contacts – all without an Internet connection.

This Land is Your Land Map 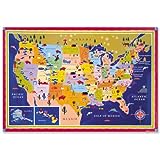 Maps make wonderful décor for a child’s rooms. Maps from eeBoo are informative, beautiful, and filled with images to capture the imagination. When maps are an everyday part of kids’ lives, geography skills come naturally.

Dan Yaccarino created the images that help identify the products, industries, and famous features of all 50 states.

6 Responses to “Microsoft Streets and Trips 2013”