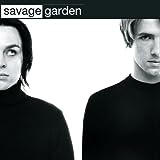 CD Columbia, CK 67954, 1997 US 11 TrackAs these two boys from Brisbane, Australia, know, it doesn’t hurt to be endorsed by Rosie O’Donnell. When the Queen of Nice sang the words to “I Want You” and the praises of the duo behind it, the song catapulted up the charts. Largely ignored by the serious music press, Savage Garden have cultivated a vast fan base on the strength of their music–and airplay–alone. As formulaic as it may appear, the ballad “Truly Madly Deeply” was lodged at No. 1 for week