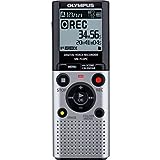 Olympus–VN-702PC audio recorder, captures stereo sound with an external condenser microphone and can record in both MP3 and WMA formats, 2 GB of internal memory resulting in over 850 hours of recording and has a microSD card slot with the potential to hold up to 32 GB of additional memory.