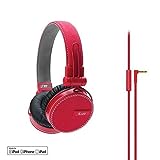 Channel more than just your music with your headphones. Whether you’re walking down the street or riding the subway, your headphones are an extension of YOU. Inspired by city life, the canvas-covered ReF headphones complement your casual sneakers and denim jeans. Built with a titanium diaphragm that delivers powerful, deep bass, ReF will bring your hip hop, rock and alternative music vividly to life. These portable headphones collapse inward to no more than the size of a softball, so they’re