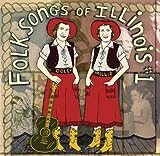 A lively and enlightening slice of Illinois’s rich musical heritage Although few are aware of it, the state of Illinois has some of the richest and most varied musical traditions in the country. As a major agricultural producer bordering the South and situated on the nation’s major waterways, Illinois became home to styles now called folk, country, country blues, bluegrass, gospel, and string band. At the same time, as an industrial center, Illinois attracted workers from all over the United St

One Response to “Folksongs of Illinois, Vol. 1: Volume 1”